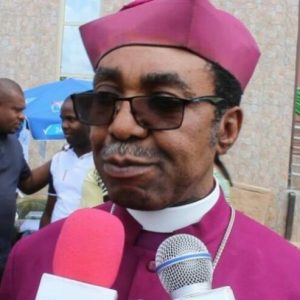 Archbishop Emmanuel Chukwuma of Enugu Anglican Ecclesiastical province has described the non-functional Eastern Railway as part of the strategy designed by the authorities for the marginalization of the indigenous people of Eastern Nigeria Region.

Archbishop Chukwuma spoke recently during the commissioning of the Railway Hospital in Enugu which has been newly rehabilitated by GIBC.

Archbishop Chukwuma lamented that whereas the use of even the more recent Abuja-Kaduna rail line is in full swing and Lagos-Kano rail line is optimally functional, it is only the Port Harcourt-Maiduguri rail line that has remained in comatose. He wondered why that should be the case.

He challenged the Minister of Transport, Mr. Chibuike Amaechi, to ensure that the eastern rail corridor becomes as functional as others to avoid the affected states interpreting the neglect as part of calculated marginalization. He said: “I have another challenge for both the federal and state governments. They should rehabilitate the road leading to this hospital. Again, people travel from Abuja to Kaduna by rail. People also travel from Lagos to Kano by rail. What happened to Enugu-Port Harcourt rail? If that rail line becomes operational, it will create employment and government will generate more money. Somebody should tell Chibuike Amaechi that the eastern railway must be active henceforth – else we will count it as part of marginalization. The people in Nigeria need a revolution and the federal government’s next level must carry the south east along.”

Managing Director of Nigeria Railway Corporation, NRC, Mr. Fidet Edetanlen Okhiria, said the Railway hospital in Enugu was rehabilitated because some of the duties performed by the NRC staff were very tedious and required quality and prompt medical attention. He explained that the hospital transformation was indicative of the fact that the conducive atmosphere created by the various policies of Buhari administration was yielding positive results. He announced approval for reconstruction of the road leading to the hospital, assuring Enugu residents that President Muhammadu Buhari’s administration is totally transforming the railway sector of the Nigerian economy.