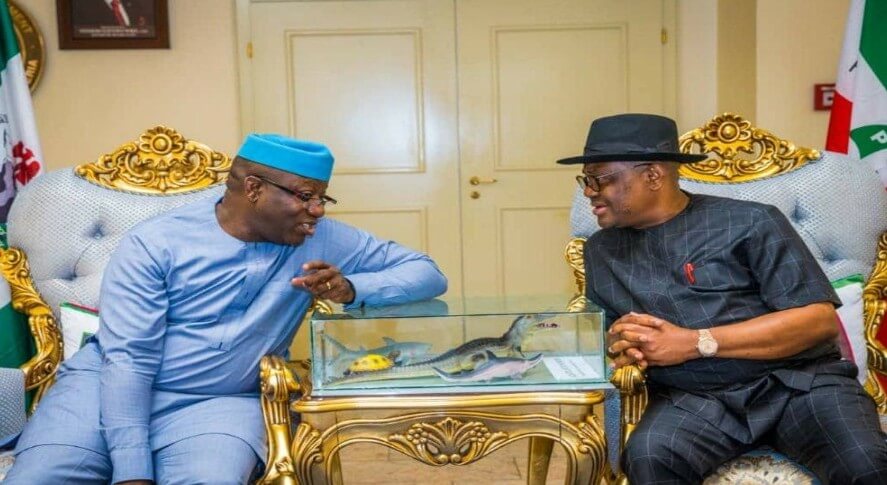 The Nigerian Governors Forum (NGF) said on Monday, 27 September 2021 that it was waiting for the verdict of the Supreme Court before taking any decision on the vexed issue of Valued Added Tax (VAT). Governor Kayode Fayemi of Ekiti, also the Chairman of the forum, stated this while featuring on a programme on Arise Television, monitored in Ado-Ekiti, Ekiti State. Fayemi said the forum believed that the controversy over VAT required both political and legal measures to be settled. “But, our take on this is that the Supreme Court should accelerate its decision so that we have clarity over who should be in charge of Value Added Tax (VAT), whether it is the Federal Inland Revenue Service, or States.

“States that have gone to court believe clearly that this responsibility evolves, according to their own understanding, on what the Constitution says. “The important thing is that our tax system is problematic, confusing, and contradictory. We need to do a lot more to clarify things so that it can give room for more efficient and effective collection of taxes,” Fayemi said. The governor also emphasized the need to channel borrowed funds to regenerative ventures that would strengthen the nation’s economy and generate more jobs for the citizens.

He said that there was nothing wrong in the recent call by President Muhammadu Buhari for a downward review of the nation’s debt portfolio, owing to the prevailing revenue challenges facing the country. “The President Buhari administration ought to be commended on the utilization of money being borrowed. It has utilized these monies more on infrastructure development than consumption which has aided economic growth.

Clearly, it would be great not to borrow, but it would also be great to redirect the funds that we have to regenerative areas of our economy. Realistically, we have a revenue challenge which has not enabled us to build an economy that responds to the yearnings of Nigerians.
I don’t think there is anything wrong in the President, as a major voice in international affair, particularly in Africa and the black world, calling for a review of debt management and arrangements,” he said.

The Chairman of the NGF also called for a comprehensive approach that would complement the National Security Response Strategy in tackling the lingering security challenges facing the nation. According to him, the challenge ultimately was that we must tackle insecurity not on a state-by-state basis alone.“Security is a permanent issue on the agenda of our State and as the governor, Ekiti is a state that is on the outer boundary of Northern and Southern Nigeria, right from Kogi and Kwara states. Some of the things that happen in the Northern states do have an impact on our security in Ekiti State, just as it does in every other state around us and clearly.

“I have argued in the past that there is an inexplicable linkage between the fallout of insurgency and banditry in the Northeast and the Northwest and the kidnapping we are witnessing in some parts of the South. Our duty is to ensure that we protect the citizens on our watch and we have been trying to do that consistently. We have pulled together joint security initiatives between mainstream security institutions like the Police and the Military and also our own local security base. Tackling insecurity should be through a comprehensive approach that will complement the National Security Response Strategy and reduce this scourge that we are experiencing in the country,” he said.

Lending his voice to the new Petroleum Industry Act, the NGF chairman said: “We do not believe that the Ministry of Finance (incorporated) and the Ministry of Petroleum Resources should be the sole owners of the company that have emerged out of the Petroleum Act. We believe that the entire body of petroleum institution is the product of the federation and not only the Federal Government. And, we have suggested that the one body that belongs to both the Federal, State, and Local Governments is the Nigerian Sovereign Investment Authority in which we (the states) are all shareholders. And, if it is held in trust by the Authority, then we are a lot more comfortable in seeing that as a federation company rather than a Federal Government company. The second concern that we have expressed relates to the depletion of the federation account by the various percentages that have been earmarked for frontier states and host communities of the petroleum product. Without prejudice to what the host communities deserve,” he said.

On the 2023 general elections, Fayemi predicted victory for the APC. He said: “contentions are always going to happen. APC is a big Party with different tendencies and there will be contentions for and against. “We are very confident that this Party will produce the next government in this country in 2023, but before we get there, we are more focused on the country now. The Party is more interested in the stability and security of Nigeria. What is happening internally is something we will resolve internally,” he said

In another development, according to Helen Oji of the Guardian Newspaper Nigeria, operators in the printing sector have stressed the need for the government and its agencies to increase patronage of locally-made products and remove tariffs on raw materials.

Managing Director of Academy Press Plc, Olugbenga Ladipo regretted that a huge tariff was always imposed on local producers while importers of finished goods were not tasked with any obligation. According to him, with the persistent dollar surge, coupled with the devastating effect of the COVID-19 crisis, there is a need for the government to support the industry by imposing tariffs on imported goods and eliminating charges on raw materials to grow indigenous firms.

Ladipo, who spoke in an interview with journalists at the 57th virtual yearly general meeting of Academy Press held in Lagos at the weekend, said: “There are challenges in the industry that we feel could be managed better but these are things that are essentially out of the control of players in the industry. Why are Nigerians going to do printing jobs abroad, even if everybody has a right to go anywhere and print? The policy makers can make it difficult for people to patronize importers to grow the local industries. There are agencies of government that are spending a lot of money on printing, especially UBEC and INEC apart from corporate organizations that also do things on their own. These agencies are supposed to be mandated by the government to patronize local industries.”

He added: “Every industry that is up and doing well will not depend on importation so the government must look at the policies surrounding business and do the right thing.” Academy Press Chairman, Wahab Dabiri, urged the government to address some of the issues that are adversely affecting the progress of the industry. He said the industry is in dire need of a new policy direction that will facilitate the establishment of local paper mills and the production of relevant printing materials. In addition, he said streamlining importation and port activities as well as provision of adequate forex for the industry will boost local production.

Reviewing its performance, Dabiri said the company’s loss before tax increased from N54 million in the previous year to N304 million in 2020. According to him, the company’s operations suffered substantially due to the shut-down of relevant sectors that rendered services to the industry. He said delivery orders were suspended, cancelled or postponed within the period, which was contrary to expectations and norms in year-end.

50 most lucrative business ideas in Nigeria 2021