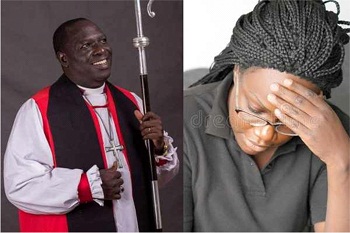 Sometimes we wonder why even respected men of God succumb to the desires of the flesh and are unable to resist temptations when they come. As business men and women, what do we learn from their rise and fall? Jesus called the Christian Community “the light of the world”. He never told us we are the darkness of the world. These temptations come when in our own understanding we prefer darkness to light, believing we will never be caught out in darkness. But the mind of God is not always open to man’s discernment. That is why God is God. Therefore, we need not ponder long to put two and two together to understand why the recent incident in Ekiti West Diocese of the Church of Nigeria [Anglican Communion] is both an eye-opener and a challenge to the Church that has always been looked upon as the custodian of the nation’s conscience.

The one-year suspension from duty of the Diocesan Bishop of the Church of Nigeria [Anglican Communion] of Ekiti West, Rufus Adepoju, has practically gone viral and is no longer news in many quarters. Adepoju was suspended for allegedly involving himself in sexual misconduct with the wife of a clergy under him.  The suspension letter was signed by the Primate of the Church of Nigeria, Most Rev Henry Ndukuba.

According to the suspension letter from the Archbishop’s Court dated December 11, 2020 and shown to Nigerian journalists, Mr. Adepoju was caught in the act with the wife of a priest under his employment and care. The Bishop also reportedly owned up to his wrongdoing.

“Advent greetings in the precious name of our LORD and Saviour Jesus Christ,” the letter read. “We write with a deep sense of concern and pain to suspend you from office as the Diocesan Bishop of the Anglican Diocese of Ekiti West. This is sequel to your conduct giving just cause for scandal and abhorrent sexual behaviour with the wife of a priest under your employment and care. These facts were admitted by you in a meeting in our office held on Thursday December 10, 2020.”

Following his suspension, the Bishop would not partake in any church activity for a year, the letter said. “By this suspension, you are not to partake in any activity of the Diocese as the Diocesan Bishop for a period of one (1) year effective from the date of this letter. Please report and handover to your Archbishop and for further spiritual guidance. It is our prayer that you will use the period to seek the face of God as we join in upholding you in prayers. The supervision of the Diocese of Ekiti is hereby devolved upon the Primate of All Nigeria. The Lord be with you.”

Some Nigerian journalists were said to have contacted the headquarters of the church in Abuja to seek clarification if there were more punishments for the bishop but they were told such matters were never discussed on telephone. Efforts by the newspapers to also get in touch with the Bishop were unsuccessful as of the time. He did not answer or return multiple calls made to him.

Bishop Adepoju, 57, was enthroned bishop of Ekiti West on June 27, 2017, after about 32 years of priesthood and after serving as a Venerable for 20 years. He replaced Oludare Oke, the inaugural Diocesan Bishop of Ekiti West, who retired from office at 70. When contacted for comment on Tuesday, retired Bishop Oke directed all inquiries on the matter to the Primate of the Church.

Sexual abuses have been an unfortunate development in the Church over many years. In the Catholic Church, cases of child sexual abuse by Catholic priests, nuns and members of religious orders are prevalent. The cases involved many allegations, investigations, trials, convictions, and revelations about decades of attempts by Church officials to cover up reported incidents.

The abused were mostly boys and also girls, some as young as three years old and the majority between the ages of 11 and 14.

The accusations of abuse and cover-ups began to receive public attention during the late 1980s. Many of these cases alleged decades of abuse, frequently made by adults or older youths years after the abuse occurred. Cases had also been brought against members of the Catholic hierarchy who covered up sex abuse allegations and moved abusive priests to other parishes, where abuse continued.

By the 1990s, the cases began to receive significant media and public attention in countries like Canada, United States, Chile, Australia, Ireland and in Europe. In 2002, an investigation by The Boston Globe led to widespread media coverage of the issue in the United States. Widespread abuse has been exposed in Europe, Australia, Chile and the United States, reflecting worldwide patterns of long-term abuse as well as the Church hierarchy’s pattern of regularly covering up reports of abuse.

From 2001 to 2010, the Holy See examined sex abuse cases involving about 3,000 priests, some of which dated back fifty years. Diocesan officials and academics who know about the Roman Catholic Church say that sexual abuse by clergy is not generally discussed, and thus is difficult to measure. Members of the Church’s hierarchy have argued that media coverage was excessive and disproportionate, and that such abuse also takes place in other religions and institutions, a stance that dismayed critics who saw it as a device to avoid resolving the abuse problem within the Church.

In a 2001 apology, John Paul II called sexual abuse within the Church “a profound contradiction of the teaching and witness of Jesus Christ”. Benedict XVI apologized, met with victims, and spoke of his “shame” at the evil of abuse, calling for perpetrators to be brought to justice, and denouncing mishandling by church authorities.

In 2018, referring to a particular case in Chile, Pope Francis accused victims of fabricating allegations, but by April, was apologizing for his “tragic error”and by August, was expressing “shame and sorrow” for the tragic history.

He convened a four-day summit meeting with the participation of the presidents of all the Episcopal conferences of the world, which was held in Vatican City from 21 to 24 February 2019, to discuss preventing sexual abuse by Catholic Church clergy. In December 2019, Pope Francis made sweeping changes that allow for greater transparency. And so should the Primate of the Anglican Communion of Nigeria.

The world faces a challenging future