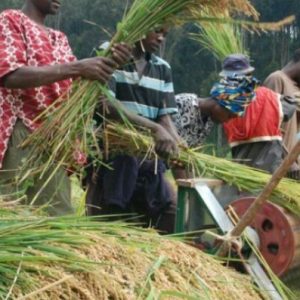 The Imo State Commissioner for Agriculture and Natural Resources, Mr. Emma Nwaogu, has assured rice farmers in the state of government’s support towards promoting rice production. A statement issued by the Public Relations Officer of the ministry, Mr. Williams Unadike, in Owerri quoted the commissioner as giving the assurance when members of Commercial Rice Farmers’ Association paid him a courtesy visit. The commissioner said that the present administration, under its agricultural roadmap, had an elaborate plan to support massive rice production in the state. Part of the plan, Nwaogu said, was the laying out of the banks of major rivers in the state for rice cultivation as well as implementation of irrigation projects for year-round rice cultivation.

Chairman of the association, Dr Maxi Ohia, recalled that the state had a long history of rice farming dating back to pre-colonial days, with support projects from international agencies. He, however, expressed the regret that previous administrations could not leverage on those crucial bilateral relationships to deepen and expand rice production output and capacity in the state.

The chairman appealed to the government to create access to the rice belts as well as assist farmers to procure improved high-yield varieties of grains. Ohia expressed the association’s resolve to support Governor Emeka Ihedioha’s administration to harness rice production potentials in the state and enable rice farming in the state retake its place as one of the first 11 states in rice production in Nigeria.