The Amalgamated Union of Food Stuff and Cattle Dealers of Nigeria (AFUCDN) has threatened to cut the supply of foodstuff nationwide if insecurity is not addressed by the Federal Government. A drastic drop in food supply would have an adverse effect on inflation and household incomes. The National President of the union, Muhammed Tahir, who disclosed this at the end of an emergency meeting of the union in Abuja, said since Governor Yahaya Bello of Kogi State intervened last three months in a move that led to the suspension of six days old industrial action, nothing has been done to address the concerns raised by the union.

The union had in March 2021, gone on strike following alleged illegal roadblocks and extortion of her members and unnecessary attacks of her members across Nigeria. Tahir said after reviewing the concerns, the union also resolved to throw her weight behind the onion union that also commenced cutting off supply to the southern part of the country. He said though AFUCDN is not on strike at the moment, it may no longer guarantee industrial harmony after three weeks, should the government fail to meet the union demands.

Also, the legal adviser to the union, Saleh Magama said the Federal Government must take necessary steps to avert cutting food supply across the country. He added: “This is an emergency meeting that is centred on what is happening to our members in South-East and South-South Nigeria. This is also to brief our members nationwide on the aftermath of the three-month strike. 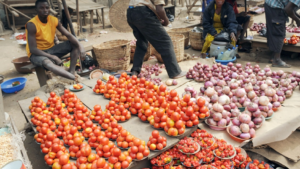 “Today’s resolution is that we are declaring support to the various unions under the umbrella of the amalgamated union that takes steps to secure its members. For example, the onion association embarked on strike last night and as a national union, we have discussed extensively and have resolved to support them in their strike action. As an amalgamated union, we have written a reminder letter to the Federal Government through the ministries concerned and security agencies reminding them of their previous promises to the union that they are yet to do something concerning it. We reminded the government that if nothing is done within the next weeks, we may be forced to sit and have another resolution.”

The union hinted that the date for the strike will be decided on when its members meet in three weeks, saying: “it depends on the outcome of the resolution. Presently the strike by the onion suppliers is only to the South, but our strike is going to be nationwide, including the North. We will cut off food supplies in three weeks if nothing is done”. The union insisted that its demands were aimed at protecting the rights of its members while on transit and at their places of doing business. The amalgamated union said its demands to the Federal Government included dismantling all illegal roadblocks mounted by hoodlums nationwide and drawing up an agreement between it and state governments that seek to protect its members from every form of insecurity attack across the country. “To dismantle illegal roadblocks mounted on the highways by hoodlums in total disregard to laws of the Federal Republic of Nigeria, most especially from Adamawa, Taraba and Benue down to Port Harcourt. “To draw an agreement between state governments and amalgamated union of foodstuff and cattle dealers of Nigeria, that henceforth if any violence of any nature erupted in that state and our members are attacked, we will not hesitate to immediately withdraw our services,” the amalgamated union said.

New board for Union Bank as Titan Bank takes over

A tale of Africa’s wise leaders