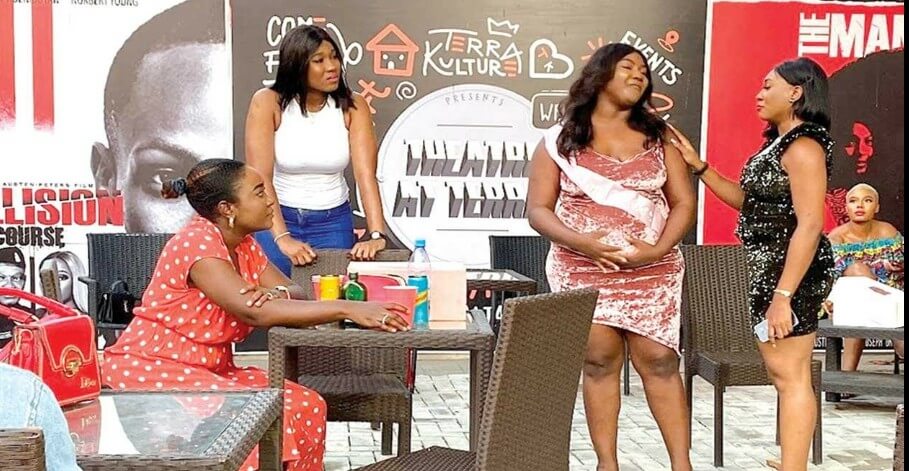 The saddest truth about betrayal is that it never comes from your enemies but from those you trust the most. Although this aphorism cannot be attributed to anyone living or dead, the validity remains as real as the human skin.  The pains are felt to the marrow each time there is a break in trust whether in business, relationship, marriage or social life. It hurts like fire. Perhaps, to draw attention to this, Minna Davies has written the Baby Shower.

Despite leading a licentious life, playing on the emotion of her prospective partners, Amanda still keeps her first love, Hakeem.

Dumebi, the 22-year-old university undergraduate, is not as fortunate as her elder sister, Amanda and her friends. She is impregnated. The man who is responsible breaks up with her when she refuses to abort the baby.

Rita is always at best with alcohol, while Bunmi, the plain Jane, is vivacious.

The bossy Rita is heartbroken, when her boyfriend of four years, Hakeem, breaks up with her. Hakeem drops her for his first love from high school, Amanda.

To make the coterie of friends happy, Amanda organizes a gig for her younger sister’s unborn child, even though the baby is still enjoying heavenly bliss in the womb.

Expected to cheer up Dumebi, the soiree soon turns sour as the past, even the present, begins to haunt them.

The conversation moves from their pranks to amorous dealings, sharing stories of heartbreaks, pregnancy scares and betrayals. They reveal their true selves to one another.

The play reaches its crescendo when Amanda and Bunmi engage in a fight. They throw hurtful words at each other. Bunmi tells the house of how Amanda has been frolicking with Hakeem, Rita’s partner. Rita goes berserk on Amanda when she discovers that Hakeem left her for Amanda, her intimate friend. She is further demented when she discovers that Hakeem is responsible for Dumebi’s pregnancy. Hakeem has been the Casanova.

With theme and subthemes on spinsterhood, friendship, betrayal, communality among others, the play hypes the lifestyle of some urban single ladies, their infighting and some of the challenges they have to surmount to be who they are.

With a difficult to puncture storyline, the director’s ingenuity at presenting the play in a 3D format gives it the tactile sense, making the audience to feel every vibe of the scene and also to follow the emotion of each cast with tenderness and ardour. This will surely leave indelible impression on the audience, which is one of the imports of a true stage play.

Managing the space, the director created a play-within-play scenario, where members of the audience play a double role of being part of the audience and slightly the cast. This is done as the actors move around the audience, engage them in open-ended dialogue and rhetorical questions.

Well rated, the play is a caution for people, especially ladies, to be sensitive of their friends and also,  all that glitters is no gold.