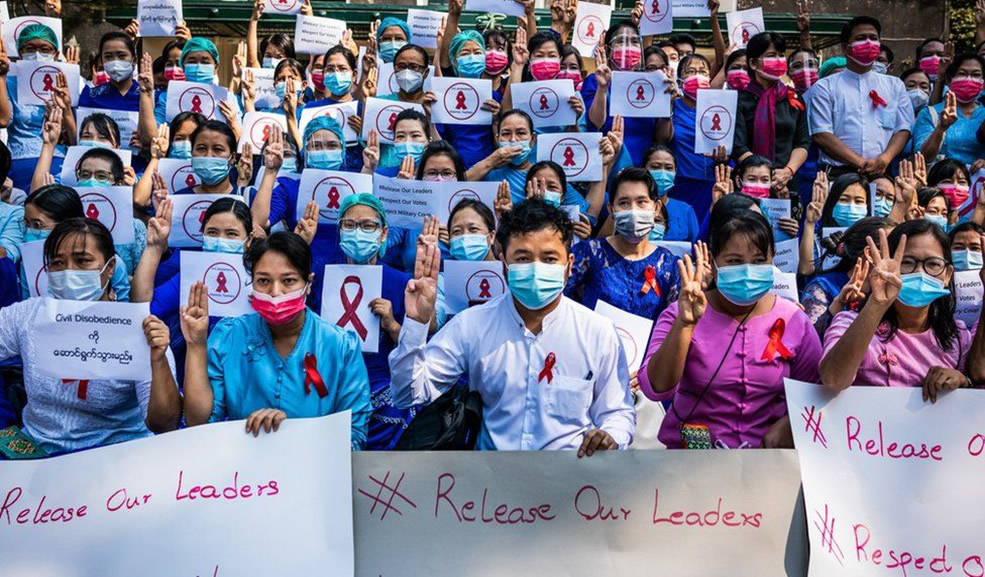 Formerly known as Burma, Myanmar is a country of 54 million people in South East Asia which shares boundaries with Bangladesh, India, China, Thailand and Laos. From 1962 to 2011, the country was ruled by an oppressive military regime which attracted international condemnation and sanctions.

For many years, one of the most prominent political activists, Ms. Aung San Suu Kyi, campaigned for democratic reforms. As a result, gradual liberalization began in 2010, even though the military still maintained considerable influence in the lives and welfare of Myanmar citizens.

After free elections were held in 2015, a government led by Ms. Suu Kyi came to power. But in 2017, just two years into her reign, a deadly military crackdown on Rohingya Muslims sent hundreds of thousands of Myanmar citizens fleeing to Bangladesh. It triggered a rift between Ms. Suu Kyi and the international community.

At home, she remained popular and her party won by a landslide in the November 2020 election. But again, the military stepped in to take control of the government.

This time, the military intervention met with stiff opposition from the generality of the populace. A civil disobedience movement began to gain momentum right away, with teachers and students protesting against the military coup of Monday 1st February 2021.

Demonstrators at a university in Yangon, the biggest city in Myanmar, chanted their support for detained leader Aung San Suu Kyi and wore red ribbons, her party’s colour. Ms. Suu Kyi and other leaders have been held in captivity since the military coup. She has not been seen in public since Monday and it is widely believed that she is under house arrest, according to officials. Earlier, the military detained another senior leader from her National League for Democracy (NLD) party.

Myanmar has remained mostly calm in the aftermath of the coup which plunged the South East Asian country into socio-economic uncertainty.

On the afternoon of Friday, 5 February, hundreds of teachers and students gathered outside Dagon University, where they displayed the three-finger salute – a sign that has been adopted by protesters in the region to show their opposition to authoritarian rule.

Students at Dagon University chanted “Long live Mother Suu” and carried red flags, the colour of the NLD party, according to media reports. “We will not let our generation suffer under this kind of military dictatorship,” Min Sithu, a student told journalists.

There have been a number of demonstrations in different parts of Myanmar – the first large-scale street protests seen in the country since the coup. Residents in some cities including Yangon have conducted nightly protests from their homes, where they have been banging pots and pans and singing revolutionary songs, and there have also been daytime flash mobs.

Some healthcare workers, teachers and civil servants either organized small protests or went on strike, while others continued to work, wearing symbols of defiance such as a red ribbon. About 70 MPs are said to have held an insurgent parliament, to replicate the parliamentary session that was supposed to take place during the week.

Many have also turned online to protest against the coup. The military temporarily banned Facebook, which is widely used across the country. After the ban began on Thursday, many Burmese citizens flocked to other social media platforms like Twitter and Instagram.

The military overthrew Ms. Suu Kyi’s government and tried to justify its position by claiming that the November election won by the NLD was fraudulent. That allegation was in stark contrast with the country’s election commission which maintained that there was no evidence to back up the military’s allegation. The military’s move met with global outrage.

On Thursday, US President Joe Biden called on the military to “relinquish power” and to release detained officials and activists. The US threatened severe sanctions on Myanmar. However, the military seemed undeterred by the global disapproval, continuing down its path of consolidating power and appointing new ministers in the capital Naypyitaw.

The UN Security Council also called on the military authorities in Myanmar to release Ms. Suu Kyi and other detained leaders – but stopped short of condemning the coup. In doing so, it brought China and Russia behind a call for her release, in what correspondents described as a rare show of international solidarity.

After he seized power in the military coup, General Min Aung Hlaing addressed the nation on television. “There was terrible fraud in the voter list during the democratic general election,” he announced. The army alleged that the country’s election commission failed to address its findings.

Independent observers agree there may have been significant errors in the voter rolls, but there was no evidence that people actually committed electoral fraud as no evidence was presented. The commission also pushed back, saying there was no evidence to support the army’s claims. The US-based Carter Center, which had more than 40 observers monitoring the polling stations on Election Day, said that voting had taken place “without major irregularities being reported by mission observers”.

Central to the military’s claims were the voter lists, on which a person’s name must appear so they can take part in the election. These are compiled by local administrators and are based on previous election lists and other official data. A draft was released in the summer of 2020 and an amended one again in October, which led to a period for corrections to be issued. The final lists were posted outside polling stations.

The military claimed to have found widespread inconsistencies and many cases of ineligible voters. In the evidence it presented so far, it said there were nearly 10.5 million instances of irregularities. The military said it aggregated lists from different towns and then identified entries where the national registration number had been repeated – either under the same or a different name. It said it found others without a national registration number at all.

No one was able to verify the data independently because the final voter lists were removed from public view after the election and the election commission withheld the data, citing privacy concerns. The army claimed these lists revealed instances where it was possible the same person could have voted more than once – by being registered in different places.

The national election commission said this would not have been possible because there were effective safeguards in place. “These persons could not cast their votes many times in a single day,” it said in a statement, pointing to the indelible ink administered on voters’ fingers, which would normally last for at least one week. Indelible ink is used in many elections around the world, and in Myanmar it was provided by the United Nations and Japan. The dye contains silver nitrate which stains the skin on exposure to sunlight and is described as “resistant to attempts to remove it using water, soap, liquids, home-cleansing, detergents, bleaching product, alcohol, acetone or other organic solvents”.

The election commission also pointed to strict Covid-19 travel restrictions, which would have made it particularly hard to vote in multiple locations. These restrictions may also have distorted the lists in some areas, with voters registering outside their usual locality, unable to return home.

Myanmar began implementing restrictions on travel as Covid cases began to increase in the second half of 2020. This, says one local election monitoring group, may have resulted in “inflated” lists in some areas because “they couldn’t go back due to Covid”. It could have meant names appearing more than once on the overall voter lists. But there is no evidence that this led to deliberate acts of multiple voting.

The military also claimed that the voter lists contain almost five million names without associated national registration cards. This was used to cast doubt on people’s right to vote, although it has not been clarified how this might have happened. It is possible to get on the voter list without official ID on the recommendation of local officials in an area, according to the election commission. These officials must certify in a letter that someone is a local resident. However, it is unlikely this would by itself account for 4.6 million discrepancies.

The ID card itself is also not required at the polling station if citizenship can be demonstrated with another form of documentation. It is important to note that the national registration card is not available to everyone in the country, like the Rohingya minority in Rakhine state, who were largely disenfranchised. Voting was cancelled in some areas, and in other regions which are home to minority groups, with officials citing security issues.

It is not the first time there have been issues over voter lists in Myanmar. In 2015, when Aung San Suu Kyi’s NLD also won with a big majority, there were questions raised about the integrity of the voter lists, including people whose names were missing just a week before the vote. It was also known that in the months before this latest election in Myanmar, there were mistakes on the electoral roll. But clear weaknesses in voter registration in a poor country with fractured bureaucratic systems do not amount to deliberate fraud on the scale alleged by the military. That is the point. 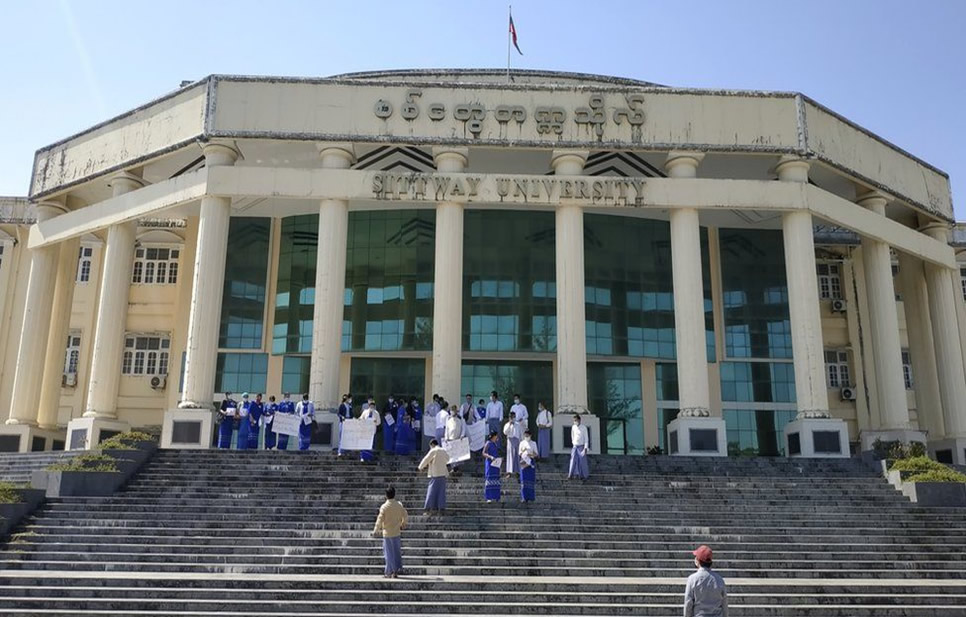