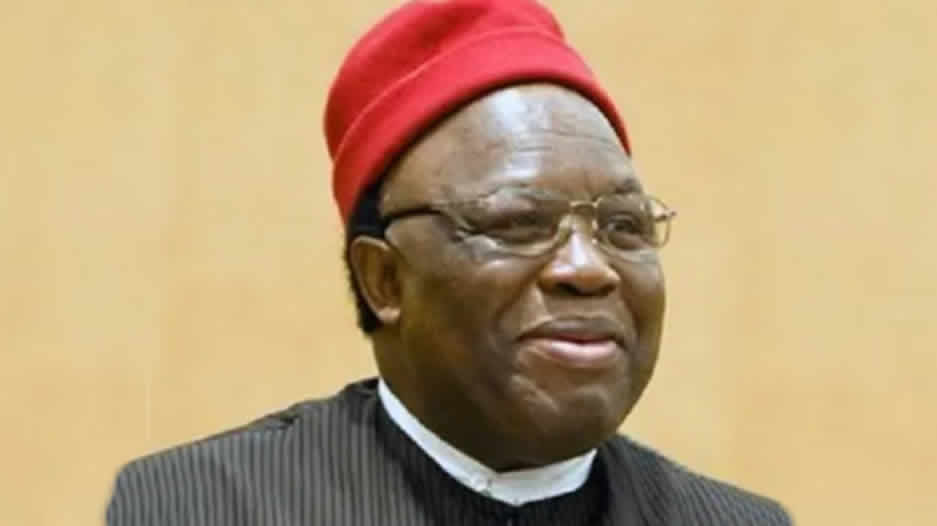 On Wednesday, 20 January 2021, Professor George Obiozor, the newly-elected President-General of Ohaneze Ndigbo – which is the apex socio-political organization of the Igbo of Nigeria – warned the leader of the Indigenous People of Biafra (IPOB), Nnamdi Kanu about his separatist agenda. Obiozor, who was at various times, Nigeria’s Ambassador to the United States, Israel and Cyprus spoke to journalists in Enugu State. He explained that there was no reason for the Igbo to demand separation from Nigeria and warned Kanu to be mindful of his “actions and utterances” in order not to jeopardize the country which already had so many challenges to deal with.

“The Igbo nation is not at war with the rest of the country and there is nothing that demands our separate existence from Nigeria. We have mutual responsibility in this matter and it is sacred in our hearts. All actions or utterances that put us in imminent or present danger must be avoided. Kanu should act and play his part well. There lies his honour.”

Obiozor said the Ohaneze under his leadership would ensure a better representation for the Igbo in Nigeria. His words: “How we are perceived as a people is borne out of our feeling of insecurity in the country. Our leadership will find out how to reduce this vulnerability of our people. I am ready to provide leadership and we shall not disappoint. We must invent a well-defined common course for our people. We must unite our people. We need a leadership that will be progressive. I, therefore, call on our people to join hands with us to bring accelerated development to our place,” Obiozor said.

Elected the President-General of the Ohaneze on 10 January, he succeeded Chief John Nnia Nwodo as captain of the apex organization.  But in a similar development, a faction of Ohaneze Ndigbo which is rebelling against the election of the professor described the election that enthroned him as illegal and dragged him to court. The Ohaneze faction led by Uche Okwukwu, in an application filed on 14 January 2021 before the Federal Capital Territory (FCT) High Court sitting in Bwari, Abuja, prayed that Obiozor be restrained from parading himself as the President-General of Ohaneze Ndigbo.

The claimants said Obiozor was a product of an illegal election held in Owerri on 10 January 2021, and as such, the court should restrain him, his agents and servants from further holding or summoning any meeting whatsoever of Ohaneze Ndigbo without consultation with the Secretary-General as the constitution stipulated. They sought in their originating summons an interpretation of articles 10, 11, 14 and 21 of the constitution of Ohaneze Ndigbo, brought pursuant to Order 2 Rules 1, 3 and 4 of the Federal High Court of the Federal Capital Territory (Civil Procedure) Rules 2018 and Section 6(6B) of the 1999 Constitution. The matter was been fixed for hearing on 21 January 2021.

The crisis rocking the transition process of Ohaneze Ndigbo was apparently deepened when the Chief Uche Okwukwu faction sued the newly elected Prof. George Obiozor, pleading with the court for an order to restrain him from parading himself as leader of the apex Igbo group. Okwukwu alleged that Obiozor was the “product of illegality” as the election he purportedly won on 10 January 2021 was not conducted in line with the constitution of the organization. Okwukwu who had been “suspended” as Secretary-General of the organization led a faction that elected Chief Chidi Ibeh as President-General on 9 January. This followed in the wake of the Indigenous Peoples of Biafra (IPOB) saying it would not recognize Obiozor as the President-General, on the ground that he was an imposition on the Southeast by certain “cabals running the Nigerian affair.” Speaking through its spokesperson, Emma Powerful, the group claimed that the Presidency and Miyetti Allah were “instrumental to Obiozor’s emergence.”

In the case brought before the Abuja High Court and billed for hearing on January 24, Okwukwu is also asking for an interpretation of Articles 10, 11, 14, and 21 of the organization’s constitution. The plaintiff also asked for a declaration that his suspension as scribe was invalid and that the December 20 Ime-Obi meeting that produced the Chief Enwo Igariwey-led election committee was null and void since the constitutional provisions were allegedly not met. He demanded N30 million as general damages against the President-General and registered trustees of the body. However, an Igbo chieftain and one time National Chairman of All Progressives Grand Alliance, Chekwas Okorie, advised the claimants to be mindful of what he called “the verdict of history.”

He noted that the same piece of advice was equally for others who had gone ahead to register or float parallel organizations with the same name as Ohaneze. “Ohaneze as the Igbo umbrella organization is 45 years old. Some of us have been committed and consistent members of the organization from its inception. I am reminding one and all that the matter of Ohaneze became spiritual from the days it had Dr. Nnamdi Azikiwe as its Patron, Dr. Akanu Ibiam as Chairman and Chief Jerome Udoji as Secretary. These spoilers must be careful because Amadioha, the Igbo god of retributive justice, is merciless.” Okorie said he expected Okwukwu to present himself to lead Ohaneze as President-General in the next four years when it would be the turn of the Igbo people of Rivers State extract to produce a person for the post.

We at Imo State Business Link Magazine just think that Professor Obiozor, Chief Okwukwu and Nnamdi Kanu should dialogue to find a way forward for Ndigbo. Okwukwu should withdraw his case from the court and present himself for leadership after Obiozor’s tenure. Nnamdi should continue to lead the youths of Igboland and make more consultations with the leadership of Ohaneze on the state of the nation.

Above all, Ohaneze must endeavor to get the Nigerian government to hold a plebiscite to enable the Nigerian people exercise their freedom. No Nigerian should be a slave in his own country, subjected to a union against his desire.

In a democracy, the will of the people must prevail. If Nigerians are generally not willing to remain as one country, then let their wishes be respected by their leaders. The issue of forcing a people into a union they don’t like or want can be dangerous and should be avoided.

If the intention of the federal government is genuine, it should be able to conduct a referendum and the leadership of both Ohaneze and Oduduwa must see that this happens in the interest of justice.

We recommend a situation like we have in the United Kingdom where the four nations of England, Scotland, Ireland and Wales merged to become Great Britain. In the same way, Biafra, Oduduwa, Arewa and Middle Belt can become different nations and merge to become Great Nigeria. That was the sort of arrangement Nigerians inherited from their colonial master before the military came into government and turned the country’s democracy upside down. Nigerians need to get back to basics and to achieve this, Ndigbo must learn to speak with one voice.

Hard lessons from the coronavirus pandemic