With files from Tribune

Professor Sambo, while inspecting facilities at the Garki Hospital, Abuja, said the scheme is fine-tuning its policies and programmes to engender closer collaboration with healthcare providers, health maintenance organizations and sundry stakeholders. He described the problems plaguing health insurance scheme in Nigeria as “systemic”, requiring a complete paradigm shift. According to him,  “what we have been doing in the last two years is to  engender value re-orientation that will make the scheme credible and a result-oriented organization, entrenching transparency and accountability in the entire operations of the national health insurance scheme as well as accelerating the attainment of universal coverage coming with so many in initiative.” Dr Sambo expressed concern on the waiting time for the issuance of authorization codes for referral cases by health management organizations.

He said: “We say that we wanted to reduce the waiting period to six hours and when we look at the structure available at the level of NHIS, we realize that we just made a promise that we cannot fulfill. We need to do some structural changes that will allow us to be able to adhere to the six hours.”

He assured quick structural changes to decentralize the activities of the national health insurance scheme by empowering the states with necessary human resources and infrastructure to “perform the stewardship role.”

Professor Sambo listed some of the changes at NHIS as restoration of quarterly payment to the HMOs by giving them a three-month capitation payment to remove delay in paying service providers, tariff for health insurance services to reflect the staggering inflation in the national economy and partnering with giant drug manufactures to produce NHIS- branded drugs. Prof. Sambo praised the public-private partnership model operating at Garki hospital which he said has manifested in efficient management of human and material resources.

The medical director, Garki hospital, Dr Adamu Onu said that Garki hospital currently offers both primary and secondary care services to 33,468 NHIS patients, all registered on a digital platform. He added that in the first half of this year, the hospital recorded 112,000 clinic visits with NHIS patients accounting for 44.4 per cent of these patients, while the hospital is fully self-sustaining under the PPP arrangement.

In another development many Nigerian states are reported as battling severe outbreaks of cholera as cases continue to escalate. 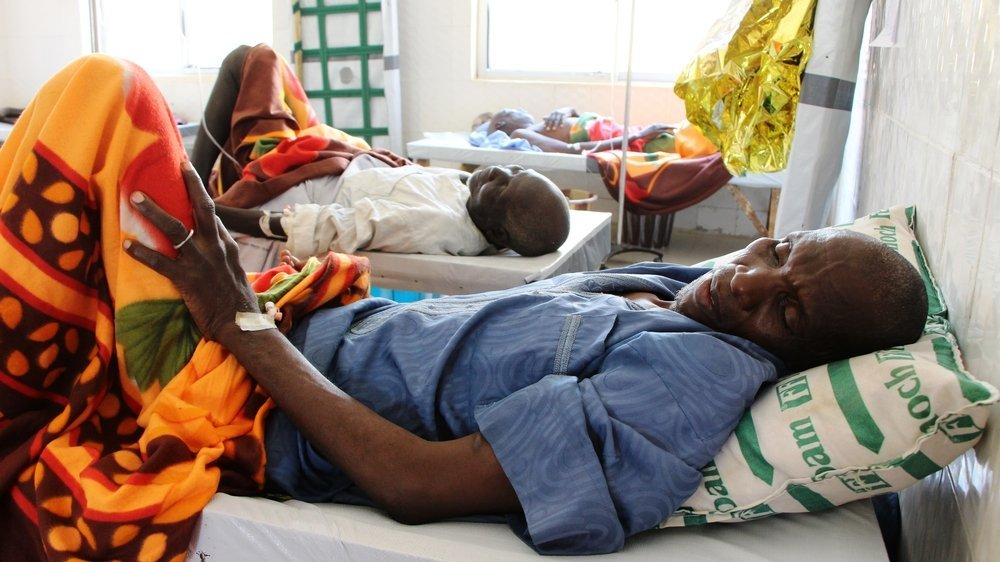 Since the beginning of 2021, at least 31,425 suspected cholera cases have been reported in the country. The most affected states are Plateau, Bauchi, Gombe, Kano, Zamfara, Bayelsa and Kaduna. The Nigeria Centre for Disease Control (NCDC) said that a total of 816 Nigerians have died from the disease in the last ten days counting from August 1.

Cholera is an acute intestinal infection caused by the Vibrio cholerae bacillus. The disease spreads through contaminated food and water, reappearing periodically in countries unable to secure access to clean drinking water and adequate sanitation. It can kill within hours if not promptly treated. The NCDC continues to advocate for improved access to clean water, proper sanitation, and hygiene.

The Ebonyi State Government on Tuesday 10 August confirmed an outbreak of cholera in two communities in Izzi Local Government Area of the state. The State Commissioner for Health, Dr. Daniel Umezurike, told reporters in Abakiliki that the affected communities were Onweonwiya and Mgbalukwu. Umezurike said a team from the ministry had visited the communities to assess the seriousness of the situation.

“Those affected by the disease have been taken to the General Hospital, Iboko, Izzi council headquarters. “No record of deaths has been reported in the area,” he said. The commissioner assured residents of the state of the government’s constant intervention and prompt response to their different health issues.  He urged the people to maintain good personal and environmental hygiene, drink good water and desist from exposing their food to flies.

Besides Ebonyi, cholera has been reported in 22 states and Abuja since the beginning of 2021. The affected states are Benue, Delta, Zamfara, Gombe, and Bayelsa. Others are Kogi, Sokoto, Bauchi, Kano, Kaduna, Plateau, Kebbi, Cross River, Niger, Nasarawa, Jigawa, Yobe, Kwara, Enugu, Adamawa, Katsina, Borno, and FCT. About 25 out of the 34 local government areas of Katsina State are now affected by the cholera outbreak.

The death toll due to cholera outbreak in Katsina State has risen to 75 from the earlier 60 reported last week. Also, about 1,534 people have now tested positive for the disease. The state’s Commissioner for Health, Dr. Yakubu Danja, disclosed this on Tuesday in Katsina. He said 25 out of the 34 local government areas of the state are now affected by the outbreak. Mr. Danja, who spoke at a press conference, said Funtua, Charanchi, Kankara, Rimi, Sabuwa, Jibia and Kafur are some of the areas with the highest number of cases.

“Of the reported cases, 67 per cent are aged 15 years and above, while three cases were reported for under one. Of all the reported cases, 53 per cent are male. Funtua LGA had the highest number of cases with 384, followed by Sabuwa with 232, Kafur 215, Charanchi 135, Kankara 71 and Jibia with 69 cases. “In terms of mortality, Funtua also leads with 18, followed by Charanchi which has 14, Jibia 11, Kankara five, while Rimi and Sabuwa are having four each.”

Danja added that rapid diagnostic cholera, medical supply kits and consumables have been distributed to the affected local government areas for prompt detection of cases to tackle morbidity and mortality.

Premium Times also reported how cholera outbreak in many Nigerian states led to scores of deaths in the past month. Some of the states affected include Katsina, Jigawa, Enugu, Benue and Plateau. As a bacterial disease usually spread in contaminated water, its symptoms include diarrhea and dehydration. The preventable and treatable disease has been reported in 23 states and Abuja since the beginning of 2021. So, please be careful and boil your water before drinking it, particularly if you live in the rural area.

Childhood sexual abuse and the role of stakeholders