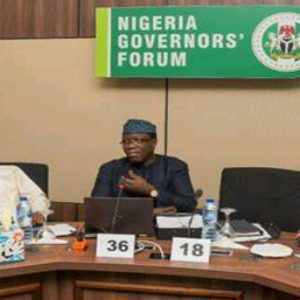 The Central Bank of Nigeria, CBN, and governors of the 36 states of the federation have agreed to pool resources to develop the agricultural potentials in their domains and create jobs. In a meeting the governors attended recently in Abuja, the CBN governor, Godwin Emefiele said the collaboration with the country’s state governors was in continuation of the apex bank’s efforts to enhance the country’s agricultural development.

Mr. Emefiele said the CBN was focused on boosting the production of identified agricultural commodities in the states, particularly those with high growth enhancement impact, create jobs, improve on the capacity of industries, and conserve foreign exchange for the country. The CBN governor said following President Muhammadu Buhari’s directives, the bank has identified ten key commodities in the states as key enterprises to be developed along the value chain to achieve the stated objectives. The commodities include rice, cotton, oil palm, tomato, cassava, poultry, fish, maize, cocoa and livestock and dairy products.

Referring to the substantial progress recorded in the past three months, Mr. Emefiele said there was need to interact more with the state governors in order to sustain the momentum. “The ultimate objective is to make our states economically viable through enhanced investments by the private sector to create more economic opportunities at the sub-national level, engage our teeming youths in meaningful enterprises, improve internally –generated revenue base for states to meet the developmental expectation of its citizens.

This is in addition to what the Central Bank was doing through Anchor Borrowers Programme to support small holder farms in the rural communities,” he said. Chairman of the Nigerian Governors’ Forum, Kayode Fayemi of Ekiti State who spoke on behalf of his colleagues pledged the cooperation of members of the forum with the CBN towards the objectives. Other state governors who spoke also gave their commitment and determination to help develop zero-oil economy with the capacity to create jobs for Nigerians.

Mr. Emefiele used the opportunity to highlight some of the achievements of the CBN in the various sub-sectors of the economy. In the cotton, textile & garment sector, he said through the Anchor Borrowers Programme, the CBN commenced the cultivation of 200,000 hectares of hybrid cotton, which was distributed to 200,000 farmers in 26 states. The benefitting states, he added included Sokoto, Zamfara, Kebbi, Katsina, Kano, Kaduna, Yobe, Borno, Adamawa, Nasarawa, Jigawa, Oyo, Taraba, Gombe, Bauchi, Kwara, Niger, Kogi, Benue, Cross River, Edo, Delta, Ekiti, Ogun and Lagos.

Mr. Emefiele said about 20 ginneries were identified in seven states, including Borno, Gombe, Kano, Katsina, Kebbi, Niger and Zamfara, to off-take the cotton financed by the bank.“The ginners are to sell their lint to textile factories with the ultimate objective of producing textiles to meet the needs of the members of the uniformed services,” he said. He confirmed that the CBN has just approved funds to be disbursed through the Bank of Industry for the operation of the ginneries.

To expand the scope of its intervention, Mr. Emefiele said the CBN met with representatives of the cotton, textile and garment implementation committee comprising governors of Kano, Kaduna, Kebbi, and the ministers for Agriculture, Trade and Investment as well as Power.

On the development of livestock, he said the CBN is determined to end the era when the country spent about $1.5 billion annually on the importation of dairy products like milk, yogurt, cheese and other milk derivatives. He said a situation where over 95 per cent of milk products consumed in the country was imported was not healthy for the country’s economy, considering that the country’s dairy industry had huge potentials to create millions of jobs and foreign exchange savings.

He explained that the sector had an undeveloped meat processing infrastructure, declining tannery operations, inadequate large-scale private investments in cold storage and transportation, and insecurity arising mostly from pastoralists/farmers clashes, rustling, and other socio-economic challenges. He said over 85 per cent of the country’s cattle, estimated at over 20 million, are owned and managed by small holders and that the CBN had resolved to support subsistent and nomadic herdsmen who wanted to be integrated in the scheme.