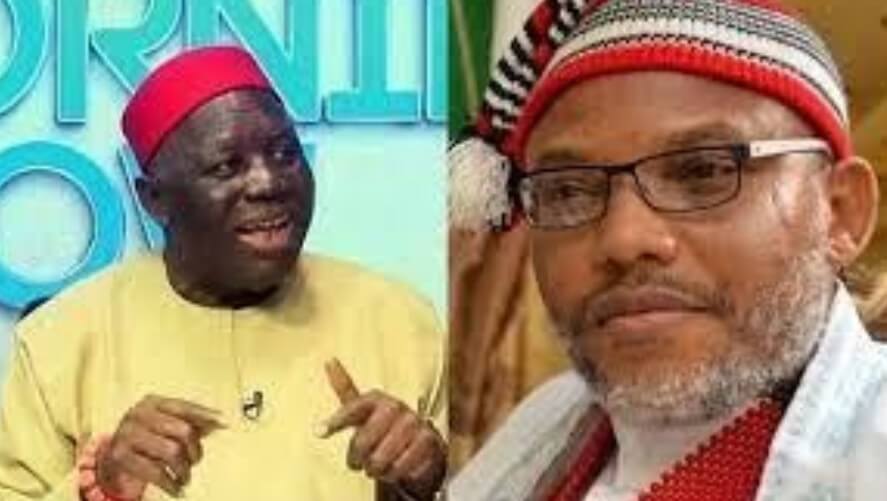 Apex Igbo socio-cultural organization, Ohanaeze Ndigbo, on Thursday 3 February 2022 cautioned against possible breakup of the country if the present imbalance in power sharing and social injustice continued. It also urged President Muhammadu Buhari to grant prerogative of mercy to the detained leader of the Indigenous People of Biafra (IPOB), Mazi Nnamdi Kanu.

The group restated its earlier demand for an Igbo to succeed Buhari in 2023 to deepen the country’s unity, stressing that it has formed a Political Action Committee (PAC) with its President General, Prof. George Obiozor as Chairman and Ambassador Okey Emuchy, as Secretary to prosecute the 2023 presidential election.

Obiozor spoke with journalists after the group’s National Executive Committee (NEC) meeting at its secretariat in Enugu. He explained that the PAC had the mandate to liaise with those seeking political power from within and outside the South East and to sensitize other parts of the country on the political quest of Ndigbo in 2023.

He reiterated the fact that the country had drifted badly, so much so that its political and economic development are now threatened, adding that time has come to reassess Nigeria’s journey with a view to rewriting the wrongs for a greater tomorrow.

He cited Ecclesiastes 3 in the Bible,’ which says: “There is a season and a time to every purpose under the heaven; a time to be born and a time to die, a time to plant and a time to pluck up that which is planted”. The essence of the above quotation, he said, was to remind Nigerians that the country needed introspective and retrospective thinking “to reassess our journey so far” as a nation. Doing so, he said, includes serious re-examination of our history as a nation.

“If the truth must be told, the nation has made two consistent mistakes that have worsened the nation’s other problems, leading to near breaking points. We drifted into the problems with nonchalance and sometimes, we were oblivious of their consequences until what we thought was an easy problem developed into a national catastrophe.”

Obiozor lamented that as of today, the country’s situation was not entirely different, but had become even more complicated. “The way things are, with communication and modern technology, our country is set, not only at the usual breaking points, which were more easily controlled and contained in the past to preserve Nigerian unity, but a point of synchronized national crisis, which will be more difficult to control today.” He argued that Nigeria was a country negotiated and amalgamated under some agreements that balanced sensitive issues of power-sharing and balancing of power regardless of other conditions, pointing out that “Nigerian nationalism is receding, as ethno-regional nationalism grows astronomically.”