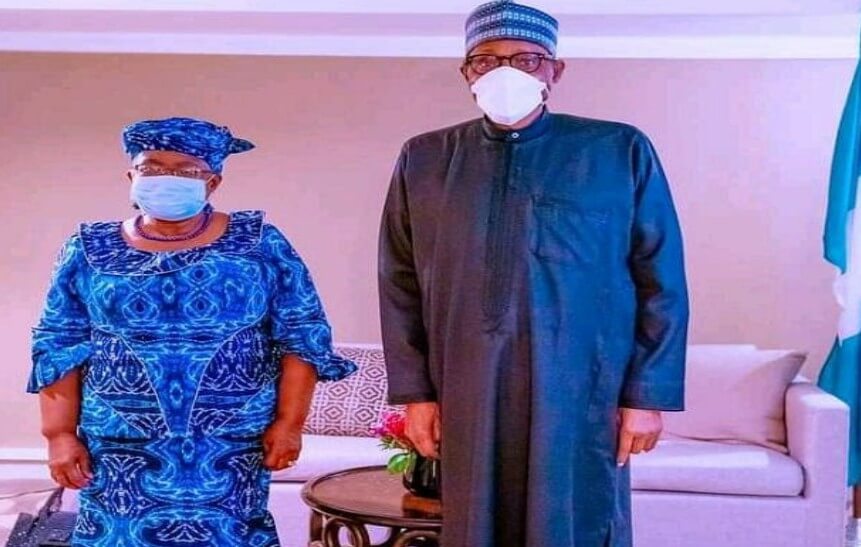 The Director-General of the World Trade Organization (WTO), Dr Ngozi Okonjo-Iweala on the night of Monday 20 September 2021 met with President Muhammadu Buhari, briefing him on her efforts to mobilize Covid vaccine manufacturers to Nigeria.

Speaking to correspondents after the meeting at Millennium Plaza, Manhattan, New York, she said she requested the President’s support for some ongoing initiatives of the world body. The former Nigerian Minister for Finance and Coordinating Minister for the Economy lamented the inequities in Covid vaccine distribution, saying that even the vaccinated are unsafe where most of the population is not vaccinated.

On her meeting with the President, she said: “It’s been a wonderful engagement. I came to brief His Excellency on the WTO and the work that it is ongoing and to talk about how the WTO may be supportive to the continent and so, to ask His Excellency to support some of the work we are doing on some of the negotiations, like fisheries, what we’re doing on health, on COVID, trying to get manufacturers of vaccines to come into the country and into the continent. So, these are some of the things we talked about.”

On the push for the manufacturers, she said: “Well, what we’re trying to do, you know, there’s this UNGA conference, and then President Biden has just called a conference on COVID on 22 September in Washington to which we’ve also been invited to. “What we’re trying to say is that the inequity in access to vaccines is not acceptable. The fact that on the African continent, less than 4% of us have been vaccinated, whereas in the rich countries, you know, close to 50% have been vaccinated, it’s not something that really is good for the world. Why? That is because we have all these variants that are circulating. And if you don’t vaccinate people, they will just migrate from unvaccinated to the vaccinated.

“So, what we’re saying is, in order to solve this problem, we have to produce more vaccines. And then we have to distribute them equitably, to parts of the world that don’t have. And that’s the narrative. At the WTO, what we’re doing is actually working directly with the manufacturers. We’re helping them monitor their supply chains, which are very complicated, to see what are the bottlenecks they have, what are the regulatory issues they face, how can we facilitate trade? Moving supplies from one place to the other for the manufacturer is straight. How can we facilitate this for them?

“In return, we can ask them to de-concentrate production and go to those parts of the world where they have can invest. For example, on the African continent, we don’t want to continue importing 99% of vaccines that we use, or 90% of our pharmaceuticals. So, they should invest, and I think it’s working. Pfizer announced $100 million investment in South Africa recently. We’re also looking at Nigeria, we’re the largest country and His Excellency Mr. President also wants to develop manufacturing. So we want to support that. We’ve been working with the honourable Minister of Health to see what we can attract, the investment we can attract to Nigeria.”

On the kind of support she needed, she stated: “Oh, first on the vaccine, it’s just for the government to be able to work well with the private sector. You know, vaccines are like a good public. So, they also need investment from the government, to match part of what the private sector is doing. We need demand. Vaccine producers will not produce unless they know that the vaccines are going to be purchased. And so you know, the fact that if Nigeria can aggregate demand, then that will help to persuade them to invest and I think the honourable Minister of Health is leading a task force of which I am a member. The Deputy Secretary-General (UN) Amina Mohammed is a member as well as Akin Adesina and Mohammed Pate. We are all trying to help from the outside to see how we can move this investment.”  On the timeline to realize the objective, Okonjo-Iweala further said: “Investing in vaccines takes time. So, it’s not right away, in two to three years.  Hopefully, we will see the fruits of some of this. Nigeria had already planned to have a plant with bio vaccines. It is working with some other investors and we’re trying to help push that as well. So, in two to three years, hopefully, we’ll be able to see the fruits of this labour.”

In a similar development, the Minister of State for Health, Dr Olorunnimbe Mamora has said Nigeria records an average of 15,000 to 20,000 cases of snakebite every year with about 2,000 people killed and between 1,700 and 2,000 people whose leg or arm is amputated to save their lives after snakebite. Mamora disclosed this on Monday 20 September 2021 at a ministerial press briefing marking the 2021 International Snakebite Awareness Day in Abuja.

Mamora said snake bite poisoning known as an envenomation has long been a Public Health Challenge in Nigeria, especially in the rural areas. “Snakebite occurs, mainly during planting and harvest seasons when people go about their work in the farm or bush. The cases have increased recently, as a result of excessive rainfall leading to more mobility and deaths connected with inadequate quantities of anti-snake venom.” He mentioned the states with most cases of snakebite in Nigeria as Gombe, Plateau, Adamawa, Bauchi, Borno, Nasarawa, Enugu, Kogi Kebbi, Oyo, Benue and Taraba.

Citing the example of Public Health experts, Mamora said Nigeria is unfortunately among countries that were affected by snake bites reaching epidemic proportions. “About 5 million people in the world are bitten every year by snakes. Up to 2.5 million people suffer poisoning or envenomation. At least a hundred thousand of them die from the bites and about 300,000 are amputated or suffer other permanent disabilities caused by snake bites. In Africa, about 1 million snake bites occur yearly with half of them requiring treatment as Nigeria supports efforts to bring attention to snakebite and envenomation and the process leading to recognition of snakebite as a Neglected Tropical Disease (NTD).

The Minister of State further disclosed that In 2018,  a coalition of organizations working on global health and tropical medicine around the world including Health Action International launched the first-ever international Snakebite Awareness Day to raise awareness on the huge mostly unrecognized global impact of snakebite.

In his remarks, the Permanent Secretary, Alhaji Mamman Mahmuda also disclosed that from January 2018 to December 2020, over 45,834 cases of snakebite and 1793 deaths were reported in Nigeria explaining that some cases still remain unreported due to the fact that they were not reported to any health facility. Mahmuda who was represented by the Director of Public Health, Dr Alex Okoh said this figure underscores the government’s determination to improve access to safe, effective and affordable anti-snake venom to treat victims and why Nigeria is seriously pursuing steps towards local production of anti-snake venom.

The Program Manager of Snake Bite Envenomation Program, Fatai Oyediran said it is costly to treat a snakebite patient as it cost nothing less than N45 to N50 thousand to acquire each dose of injection and a patient will need three anti-venom injection to properly heal.

He however called for support for local manufacturing of anti-venom injection to make treatment affordable, available, accessible and cost-effective for the common man who cannot afford to pay when the accident happens.

Nigeria has developed herbal cure for prostate and breast cancer