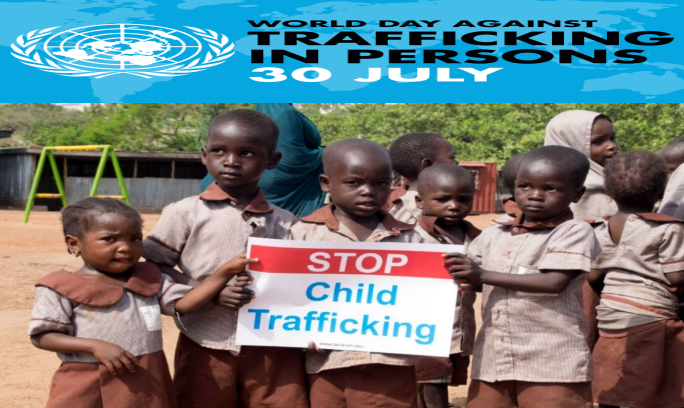 On Thursday 29 July 2021, the day preceding the official 30 July World Day Against Human Trafficking, concerned Nigerians, some of them survivors of human trafficking, marched alongside activists through the streets of Abuja, Nigeria’s capital territory. The march which was organized by Nigeria’s National Agency for Prohibition of Trafficking in Persons (NAPTIP) was part of a campaign to raise awareness on the issue and also mark the United Nations’ July 30 “World Day against trafficking in Persons”.

The UN and other concerned participants hope the survivors’ stories can help protect their compatriots from organized gangs operating a massively lucrative system worldwide. Activists say many victims of human trafficking face ignorance or misunderstanding in their attempts to get help and have had traumatic post-rescue experiences and face stigma.

The issue of human trafficking is often hidden and accurate figures on the numbers trafficked each year are elusive. In 2018, around 50,000 human trafficking victims were detected and reported by 148 countries, according to the United Nations. Victims often ended up in brothels, working as domestic servants or engaged in heavy manual labour. Some were traded around the world and across borders. Those trafficked from Nigeria were often lured with the prospect of good jobs abroad, but found themselves trapped with concocted debts by the traffickers. The journey from Nigeria commonly involved a dangerous crossing of the Sahara desert in the back of truck.

Udekwe Kennedy Obinna, one of the survivors who attended the Abuja awareness campaign on Thursday, said he was encouraged to try his luck outside Nigeria by his elder brother who was based in Italy. Obinna described the desert crossing in the back of a Toyota pickup truck, as a journey which proved fatal for the others who were with him.

“Whoever dies is thrown (from the back of trucks), no burial, no funeral,” he recalled. Upon arrival in Libya, he learned he had been ‘sold’, effectively into slavery by those transporting him. Josiah Emerole, of Nigeria’s National Agency for the Prohibition of Trafficking in Persons is keen that more Nigerians know the true stories of trafficking. “People are recruited from various places and taken to places where they are made to believe that they indebted to somebody,” Emerole said. “They made them to sign like $70,000 or about €80,000 and explain to their victims: ‘that is the amount of money we used in bringing you and until you pay all of that, you cannot be free’.”

Regina Adeleke, a native of Nigeria’s Benue state was enticed to quit her job of selling noodles and to spend all her savings to travel with her friend who promised to get her a good job in Italy. “When we got to Tripoli, we scarcely knew we had come to our madam’s house.  Madam spelt out what she said we were going to do. She threatened that if we failed to pay her enough money, she would take us to a prostitution house where we would pay her daily,” Adeleke confirmed. She finally escaped from Libya and was helped to return home by the International Organisation for Migration.