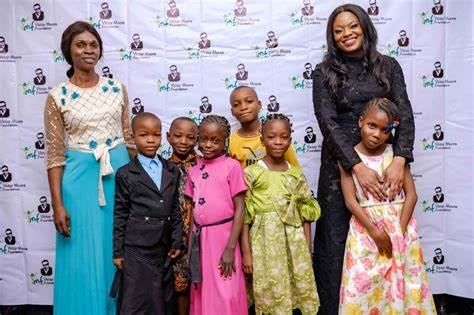 The official launch of Victor Moore Foundation (VMF) took place on July 22 in Lagos, Nigeria’s largest commercial city. The venue, Wheatbaker Hotel, hosted a gathering of invited guests, partners, among others. VMF is a non-profit body that sponsors children from low-income families and marginalized communities.

The mission is to assist underprivileged Nigerians across the country with educational support and skills. These include tuition payment, provision of writing materials, uniforms and digital literacy. Others are mentorship initiatives for kids, professional development for teachers and after school classes.

The organisation was founded by Besidonne Moore in memory of her father Victor A. Moore, who would have clocked 80 this year. The late Moore retired from the Central Bank of Nigeria (CBN) in 1999.

Speaking at the launch, VMF Director, Besidonne expressed gratitude to those that have given support for the project since inception. “In early 2021, I thought of what to do to honour my father. Education, which he was passionate about, came to mind”. Victor Moore Foundation identified one low-cost primary school and one public junior secondary which would be pioneer partner schools the beneficiaries would be selected from. Although the Foundation is starting with education support, future plans include establishing a skills hubs and parent skills”, the Director said. 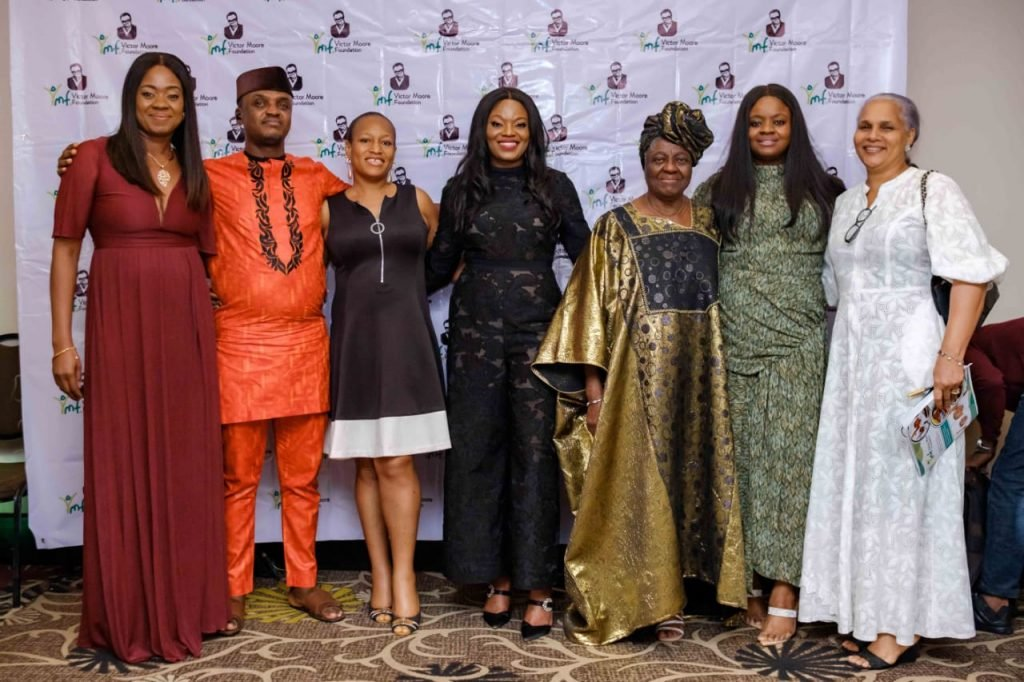 Besidonne went down memory lane of how her father pushed her and siblings to aspire to be well rounded individuals. In his tribute, Mr. Kagho, late Victor Moore’s close friend, narrated how the deceased met his spouse at a bus-stop after a conductor joined them to split change. The event was attended by some of the beneficiaries and dignitaries such as Reverend Bayo of First Baptist Church, Pastor Samson Adedokun of New Dawn Baptist Church and Toni Kan, a renowned writer.

In a similar development on 28 June 2021, the sun was burning hot outside a temporary learning space located at the Ngurno IDP Camp in Monguno, North East Nigeria, on a typical Monday. Dozens of internally displaced children, mostly from neighbouring Baga, listened as lessons continued undisrupted. In Class 3, Falmata Mohammed reached for the bottle inside her school bag and took a sip of cool water. A couple of other children in the classroom did the same. A few weeks back, the scenario would have been different. Thirsty and sweaty, many children would have run out of the school to their homes to drink water, abruptly ending their learning for the day.

“My friends and I used to rush home from school to drink water whenever it got very hot,’’ said 12-year-old Falmata. “Sometimes I waited to use the toilet before returning to school. Sometimes I had to wait for my friends to finish before we returned to school. That does not happen anymore since UNICEF gave me school supplies. I have everything I need to stay in school now.” Indeed, schooling has assumed a whole new dimension since UNICEF, with support from the European Civil Protection and Humanitarian Aid Union (ECHO) distributed water bottles, school bags and learning materials to children at the centre.

The temporary learning space, also constructed with support from ECHO, provides shelter and a safe space for the children. While the water bottles help children stay hydrated and focused in class, the learning materials facilitate continuous education, even outside school hours.

Yohanna Ibrahim, a community volunteer teacher at the centre, says coordination has become easier with the instructional materials supplied by UNICEF. “Classes are more manageable now and less stressful. Children have stopped going home during school hours and it has made coordination easy for us tutors. Children feel happier now to come to school and parents now bring their children willingly,’’ he said.

Barnabas Iliya, a 14-year-old Class 3 student, said the intervention will help him realize his dream of becoming a teacher. “I never had a bag, books and water bottle before. Staying in school was difficult, especially when I got extremely thirsty. But now I have everything I need to be in school. I hope to become a teacher and do something good with my life in the future,’’ he said.

In another development, on 5 July 2021, 150 students were reportedly abducted from a school in Nigeria’s Kaduna State, marking the latest incident in an alarming spate of attacks against children and abductions, including of students, in parts of West and Central Africa. We are deeply concerned that as in years past, non-state armed groups and parties to conflict in Burkina Faso, Cameroon, the Central African Republic, the Democratic Republic of the Congo (DRC), Niger and Nigeria will ramp up these violent activities over the coming weeks ahead of the rainy season when their movements could be restricted by flooding.

“Such incidents appear to be increasing in frequency, raising fears for the safety and wellbeing of the region’s children. Already in 2020, according to the latest report of the United Nations Secretary-General on children and armed conflict, 1 in 3 child victims of grave violations has been in West and Central Africa.

“In Burkina Faso, attacks against civilians and other violations of international humanitarian law have spiked significantly in recent weeks. On 5 June, at least 130 civilians were killed in an attack on a village in Yagha Province that lasted for hours. This was the single deadliest attack in the country since the outbreak of violence in 2015. So far this month, 178 civilians have been killed, including children. More than 1.2 million people, 61 per cent of whom are children, are now displaced because of violence – a ten-fold increase in just the last three years.

“In Cameroon, members of an armed group attacked a religious center in Mamfe on 6 June, killing a 12-year-old boy and wounding a 16-year-old boy. Attacks on civilians, abductions and killings of school children and teachers are on the rise across the northwest and southwest parts of the country. We estimate that 1 million children in Cameroon need protection from violence. Threats against aid workers are similarly increasing. Dozens of staff working for local NGOs have been attacked, abducted or killed. The first targeted attack on a UN humanitarian convoy occurred this past March.

“In the first three months of 2021, we also witnessed an overwhelming increase of child rights violations across the Central African Republic, in a context of growing insecurity and tension linked to the 2020 general elections. Recorded cases of sexual violence against girls increased almost fivefold between the last quarter of 2020 and the first quarter of 2021 – from 10 to 49. The number of children recorded as killed or maimed was also seven times higher in early 2021 than towards the end of 2020, while attacks or occupations of schools and hospitals increased from 30 to 44 over the same period.

“Attacks against children, families and schools are also occurring in Niger. So far this year, armed groups have killed nearly 300 people, including 45 children, in coordinated assaults on villages in the Tillábery and Tahoua regions. In some of these incidents, perpetrators targeted families fetching water. Up to 80 per cent of children living in areas most affected by violence need psychosocial support because of  the distress they experience.

“Meanwhile in Nigeria, the UN estimates that at least 950 students have been abducted from their schools by armed men since December. Over the past six weeks alone, nearly 500 children were abducted in four separate incidents across the central and northwest parts of the country. Many of these children have not yet been returned. It is hard to fathom the pain and fear that their families and loved ones are suffering in their absence.

“In the DRC, in the first quarter of 2021 alone, more than 3,400 violations against children such as recruitment to armed groups, abduction and killing were verified, representing 64 per cent of the total number of violations verified for the entire year of 2020.

“It is not enough to condemn these crimes, not when millions of children face a worsening protection crisis. Children living in these areas need concerted action to ensure that they can safely live, go to school or fetch water without fear of being attacked or taken from their families.

“This starts with non-state armed groups and all parties to conflict who are committing violations of children’s rights – they have a moral and legal obligation to immediately cease attacks against civilians, and to respect and protect civilians and civilian objects during any military operations. They should also not impede but facilitate the efforts of UNICEF and other humanitarian actors on the ground working to reach vulnerable children.

“The international community also has an important role to play. We need our donors to increase their contributions so that we can expand our work to reduce children’s vulnerabilities and increase their resilience to keep them safe from harm. These efforts include creating safe temporary learning environments for children in areas where schools have been closed because of insecurity, providing psychosocial support to children affected by violence, and supporting education on mine risk awareness.

“Every effort must be made to reverse the spiraling protection crisis for children as the region is on the brink of catastrophe.”

Nigerian universities and a growing army of first class graduates